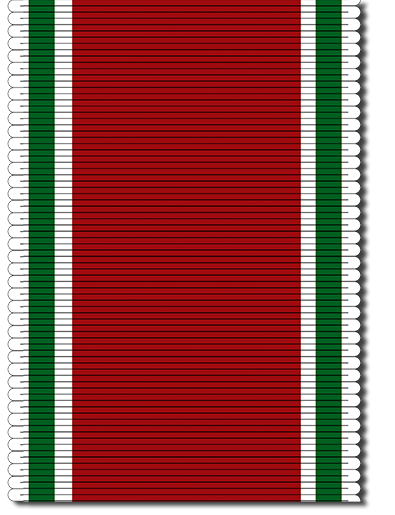 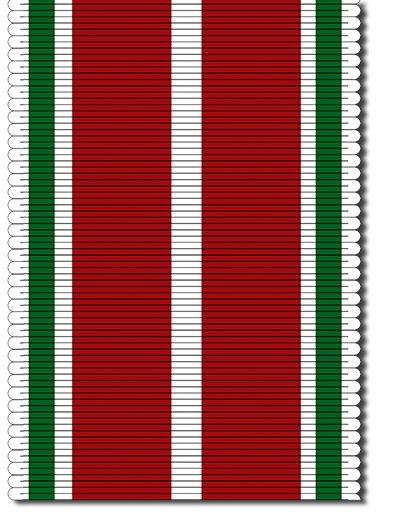 Ribbon (for killed in action)
Ask your questionsFeedback?

Home > Medals > Commemorative medal for participation in the War 1915-1918

Commemorative medal for participation in the War 1915-1918

Number of classes: one

Being awarded for: as a commemoration for those who participated in the Great War of 1915-1918

Ribbon: Depending on the recipient of the medal, there are 3 types of ribbons used: (1) red with two white and one green border stripes on either side, designated for frontline veterans; (2) the same ribbon but with a thin white stripe across the middle – for non-combatant participants in the war; and (3) the same ribbon as (1) but bearing a thin blank stripe across the middle. This type of ribbon was designated for decorating family members of soldiers who have perished during the war.

Obverse: The small Bulgarian coat of arms with two crossed swords behind it. In the background, embowed laurel and oak twigs.

Reverse: The years “1915-1918” inscribed on two lines and surrounded by a wreath, made of roses, oak and laurel twigs, and wheat stalks, all bound together with a ribbon at the bottom.

The commemorative medal for the Great War of 1915-1918 (also referred to as ‘European War’ or ‘World war’) has been introduced, at the same time as its Balkan war counterpart, in late 1933, in order to pay the necessary tribute to the living veterans of these war conflicts.

An unorthodox requirement has been introduced to those who were entitled to receive this and/or the Balkan wars medals – they had to purchase a specifically printed postal stamp which was then stuck onto the awarding certificate. The money paid by the awardees were deposited in a special fund, dedicated to raising money for the construction of a new building for the National Military History museum in Sofia.

The commemorative medal has been awarded to surviving veterans of the European war (generals, officers, NCO's, enlisted men), civilians with great merit to the war effort, military correspondents, volunteers, nurses, medic, family members (usually parents) of soldiers killed in action, etc. Also, all military banners of units which participated in the war has also been decorated with the medal. A large amount of medals has also been dispatch abroad for decorating military personal of Bulgaria’s former allies in the war – Germany, Austria, Hungary.

It has been struck of yellowish metal alloy. According to the surviving records, around 50 000 medals have been awarded in total. Additionally, nearly 200 000 have been distributed abroad, mainly in Germany.

Official decorations with this medal have been suspended since 1st January 1940. However, there are numerous awarding documents dated in 1941 and 1942.

This commemorative medal, along with the one dedicated to the Balkan wars, were actually the last awards to be introduced before the communist coup d’état in 1944.